It was a Great Adventure With Kanetix 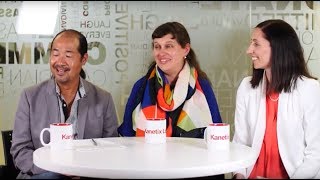 CES 2018 was another great year in automotive innovations. As part of the media team, I had the opportunity to see the innovations first hand in the front row. Major areas that continue to accelerate include the following.

Here are some of the major launches at CES.

New EV by a startup company was announced and the price starts at $45,000 USD. It is designed to have a user experience that is more similar to a smartphone than a car. They don't want to categorize this vehicle as an SUV but rather an SIV which stands for Smart Intuitive Vehicle. It comes with a screen that runs across your dash so you can play your Spotify playlist to a full video conference call while moving in an autonomous mode. They promise to ship new cars capable of level 3 autonomous by 2019. I wrote an article on Wheels.ca with all the details.

Toyota's President, Shoichiro Toyoda, says this is the next greatest recreational vehicle for Burning Man!! It is now on my bucket list to take one of these out to a Burning Man festival. Toyota continues to be committed to developing their mobility as a service platform. The e-Palette is a configurable mobile space that is autonomous. It can be for storage, a food truck, retail sales or anything else you can imagine. Check out my article on Wheels.ca for more pictures of the e-Palette.

3. Artificial Intelligence by Nvidia and Intel

Check out Brian Krzanich and Jensen Huang holding up the silicon that is the CPU for the brains of artificial intelligence. Both Nvidia and Intel are making huge strides in building hardware that works with AI and is adaptable to becoming a neural net as the machines learn and create more neural pathways. They are both building a platform tailored specifically for autonomous vehicles. They are also designed to support LIDAR sensors and high definition map interfaces and processing.

For the first time ever, HERE, the high definition map maker had a large presence at the Las Vegas Convention Centre. They have made a lot of progress in terms of partnering with car makers and technology providers. Their high definition maps have APIs that can be integrated with Pioneer infotainment systems, mobility as a service platforms, and even camera systems for DJI drones for autonomous flying. They got new partnerships with car makers directly including BMW, Audi, and Daimler.